The decade-long effort to fix the Tier 2 benefit structure finally may be bearing some fruit.

In December, Gov. JB Pritzker signed a new law that consolidates the investment functions of 649 local police and firefighter pension systems into two statewide authorities. This move doesn’t affect TRS at all.

But quietly tucked away in the legislation was a provision that tries to address problems with Tier 2 for members in those police and fire systems. TRS identified similar issues with Tier 2 for our members nine years ago.

TRS began enrolling new Tier 2 members on Jan. 1, 2011. At that time, the creation of Tier 2 was billed by its sponsors as a long-term solution to the financial problems facing TRS and Illinois’ other public pension systems.

The Tier 2 law reduced state government’s pension costs by cutting benefits for members hired in 2011 and beyond. This reduction in benefits meant that Tier 2 members not only would pay the entire cost of their pensions, their excess contributions would subsidize the state’s underfunding of the pensions owed to Tier 1 members.

No fiscal analysis was done on the Tier 2 legislation before it was enacted. A few months after launching Tier 2, the TRS actuaries identified some significant long-term problems with the design of the new benefit structure – problems that were not immediate but would manifest themselves down the road and require state officials to fix them.

We reported to our members and state officials that:

Nonetheless, the reaction to these warnings followed a well-established pattern for dealing with public pension issues: “There’s no immediate concern, so let’s put it off.”

Over the last nine years, TRS has taken every opportunity to talk about the need to fix Tier 2. We recognized that Tier 2 membership would grow quickly and compound the problems we identified.

Up until this year, there’s been no action on Tier 2. But the governor’s signature on the local pension system consolidation bill also enacts some Tier 2 fixes for these systems.

While it’s disappointing that these Tier 2 fixes are limited in scope and don’t affect our members, the good news is that finally – after nearly 10 years – state officials are recognizing the problems Tier 2 created and are taking some first steps to make things right.

The changes enacted in December, unfortunately, do not address the major problem of the financial inequity faced by all Tier 2 members. Fixing the inequity at TRS would likely cost billions of dollars because the solution is to eliminate the Tier 1 subsidy. You either lower the Tier 2 payroll contribution or raise Tier 2 benefits. In both instances, eliminating the subsidy would increase costs for state government.

At TRS we’re going to watch carefully how the Tier 2 fixes for police and firefighters work out, both administratively and financially. These changes to state law could be expanded in the future to cover other Tier 2 members – including teachers. 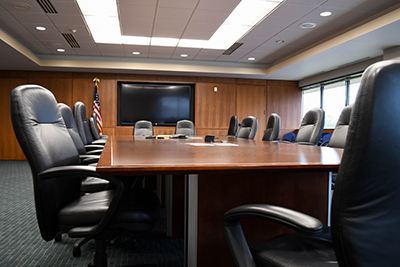 The size of the TRS Board of Trustees will expand from 13 members to 15 in 2020 under a new state law signed in December by Gov. JB Pritzker.

The expansion of the TRS Board was approved during the General Assembly’s autumn veto session as part of the new law that consolidates the investment functions of 649 local police and firefighter pension systems into two statewide entities.

To comply with the new law, TRS will hold a special election in spring 2020 to fill a new active teacher trustee seat for an initial three-year term beginning on July 15, 2020. Before the law change, the next trustee election would be in 2021.

The other new seat created by the law will be filled by a gubernatorial appointment who is not a TRS member.

The law expanding the board also contains an unprecedented twist for TRS board elections. Beginning July 15, 2020, no more than four of the five active teacher trustees can belong to the same “statewide teacher organization.” For example, if four of the five elected active teacher trustees are members of the Illinois Education Association, the fifth must belong to another organization, such as the Illinois Federation of Teachers.

The last time the TRS Board of Trustees was altered by a change in state law occurred in 2009 when the number of seats was increased from 11 to 13. In 1939, when TRS was created, the board was composed of five members.

New Trustees Appointed to the TRS Board This Past Summer

Over the summer Gov. JB Pritzker appointed three new members to the TRS Board of Trustees, bringing the total number of board members to 13. The governor increased the size of the board to 15 members in December when he signed a new law that changed the make-up of the board.

Under state law, the TRS Board of Trustees is composed of seven trustees elected by TRS members – five by actives and two by annuitants – as well as seven trustees appointed by the governor. The 15th member by statute is the state superintendent of education. All appointed members require confirmation by the Illinois Senate and cannot be TRS members. TRS members elect trustees to staggered four-year terms. 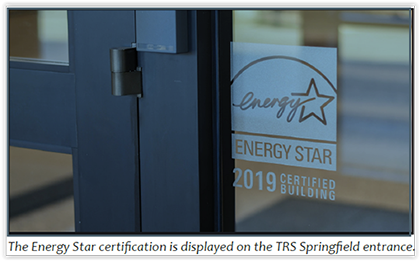 The main TRS office in Springfield has earned an Energy Star certification from the U.S. Environmental Protection Agency for significantly reducing energy use over the course of the last year.

Energy Star certified buildings and manufacturing plants are verified to perform in the top 25 percent of buildings nationwide, based on weather-normalized source energy use. These standards take into account occupancy, hours of operation and other metrics. Energy Star is the only energy efficiency certification in the country that is based on actual, verified energy performance.

Achieving an Energy Star certification has been a goal of the TRS Operations Department for the last year. In that time, the team has implemented changes in the building’s systems designed not only to improve energy efficiency and enhance staff comfort, but to save money.

Certificate of Achievement for Excellence in Financial Reporting 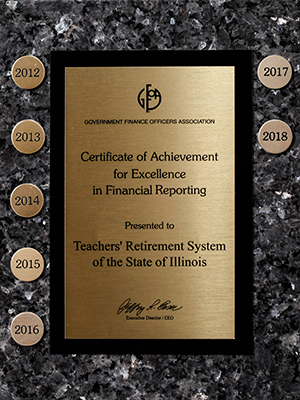 The Government Finance Officers Association of the United States and Canada (GFOA) awarded a Certificate of Achievement for Excellence in Financial Reporting to TRS for its Comprehensive Annual Financial Report for the fiscal year ended June 30, 2018. This was the 30th consecutive year that the System has achieved this prestigious award. 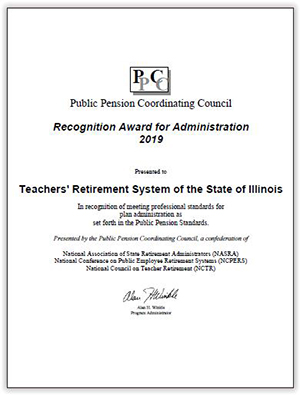 The amount shown in Box 5 on the 1099-R form represents the non-taxable portion of TRS retirement benefits paid to you for the year (see graphic below) and is the difference between Boxes 1 and 2a. Box 5 does not represent the amount of your TRIP premiums for 2019. Box 9B will only have a value if 2019 was the first year that you received a benefit from TRS.

If you do not receive a 1099-R form by Feb. 15, 2020 or you need a duplicate copy sent to you, please log in to the secure Member Account Access area on the TRS website. Annually after Feb. 15, you may request a duplicate 1099-R online for a prior year. A duplicate is mailed by the Illinois Comptroller’s Office and it will take up to 10 business days for you to receive. If you have not yet set up your online member account, please watch this video to learn how: https://www.trsil.org/videos/accessing-your-trs-member-account-online. Your Member ID is required to set up an account. 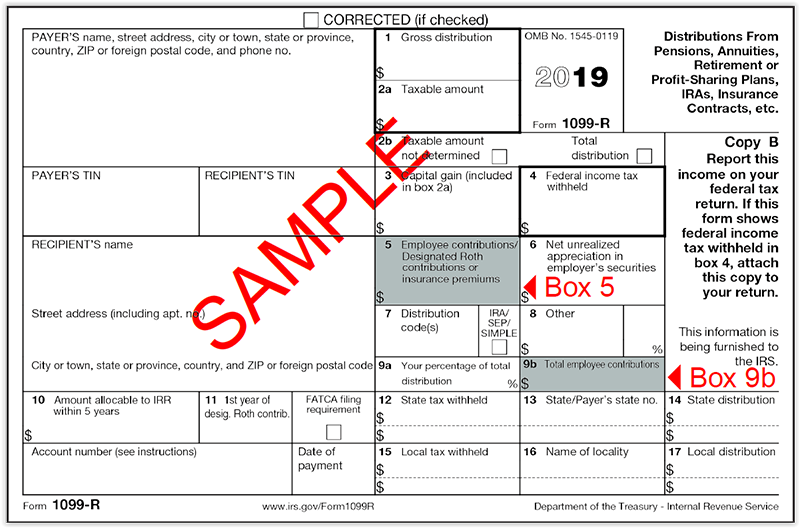 The school year is halfway over! All retired members who substitute teach should refresh themselves about limitations before problems arise: http://trsil.org/employers/retirement-issues/post-retirement-limitations 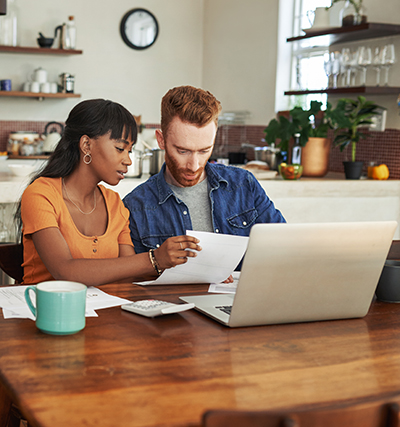 In late November, active and inactive members were emailed that their 2019 TRS Benefits Reports were available for viewing online on the TRS website. Reports are only sent to members who are not yet collecting a benefit. Retirees do not receive TRS Benefits Reports. The report summarizes the following information about a member’s TRS account: service credit, refundable contributions, beneficiary refund, beneficiaries, sick leave service, and 2.2 upgrade information.

If you are an active or inactive member who has not provided your email address to TRS and you received this newsletter by mail, please visit https://www.trsil.org. Select “Member Login” on the home page to begin creating your online account. You will need your Member ID. If you do not know it, call us at 877-927-5877 (877-9-ASKTRS). You will be able to view your TRS Benefits Report after signing in.

Additionally, please enter your email address under the contact information in the secure area so you will receive future emails from us.

Recent payments and changes in outstanding balances will not be reflected on your report, but will be shown in your online account. If you need to change your beneficiaries, complete a Member Information and Beneficiary Designation (MIBD) form: https://www.trsil.org/MIBD_form. Please print out and mail the form to us and we will update your file.

A new MIBD form replaces any former version on file with TRS.

If you see an error on your reported service record or salaries, contact your employer (school district) without delay to correct the problem. This information is reported by your employer on your behalf to TRS. It may be more difficult to correct an error if you wait until retirement.

Please call us if you believe your report has an error (other than salary or service credit), if you need an additional copy or if you have any questions about the content. 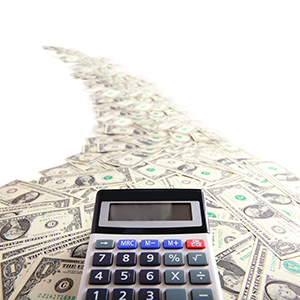 The state’s Tier 1 Accelerated Annual Increase (AAI) Program has been up and operating for more than a year and participation has been slow to materialize.

As of early December, 604 members out of approximately 3,755 who retired during 2019 agreed to accelerated payments in return for reductions in the automatic annual increase to their remaining pensions. The payouts to these members totaled $80 million. The average payment was $135,800.

Under the AAI Program, Tier 1 members accepting the accelerated payment will renounce their rights to the current Tier 1 annual benefit increase of 3 percent compounded; accept a new annual increase of 1.5 percent, not compounded; and receive a lump-sum that equals 70 percent of the difference between the estimated lifetime value of the old and new annual increases. The new 1.5 percent increase would take effect at age 67 while the 3 percent increase takes effect after age 61.

The AAI Program is one of two accelerated benefit programs created last year by the legislative and executive branches. The second, a true “buyout” program called the Accelerated Pension Benefit (APB) Program began in September for inactive TRS members. As required by the law, TRS notified 14,598 inactive members in both Tier 1 and Tier 2 about their eligibility for the program. Through early December, 422 chose the buyout. These members were paid $50.1 million. The average buyout payment was $115,000.

Are You One of 81,000 Members Who Haven’t Applied For Your ERO Refund? 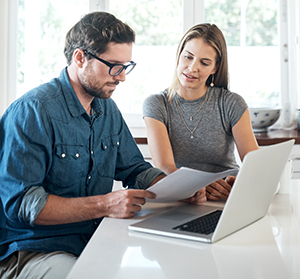 Three years ago, the TRS Early Retirement Option (ERO) that allowed members between the ages of 55 and 60 to retire from active service and avoid the automatic reduction in their initial annuities was repealed. TRS began offering eligible members a refund of the 0.4 percent salary contributions they paid to help fund the program in late 2016.

If members did not participate in the ERO, they were able to get refunds of their accumulated 0.4 percent contributions.

To apply for your refund, visit Member Account Access, https://member.trsil.org/subsections/secureaccountaccess/security/signin.aspx, and login. Once logged in, select “Available Refunds” on the left side navigation area to begin the ERO Refund process.